Rather than realistic representations of things or people, Khang is passionate about biomorphic forms - abstract shapes that have the feeling of being something living. One look at his graceful, fluid works and it's apparent the sculptor is achieving that goal.

In choosing granite as his medium, so rigid and unforgiving, he did not carve out an easy path for himself. Its interlocking crystalline structure does not easily yield to the stonemason's mallet or the sculptor's chisel.

Khang carefully works out each sculpture's mathematical proportions so the piece is not only visually appealing, but physically balanced.

Throughout history, granite has been used for monuments intended to stand the test of time.

Born in Vietnam in 1968, the year of the Têt offensive, Khang knew conflict and war from his earliest years. One day, as he sat in his home in a village in south Vietnam, his uncle rushed in, told him to grab what he could carry and to come with him. The uncle had intended to take Khang's siblings with him, but a shift in the political winds meant that they had to get out in a hurry and join the thousands of other "boat people" who fled Vietnam in practically any vessel that would float and take them out of the chaos of Vietnam after the long war.

Khang was 11 when he made a journey that many of his fellow countrymen never survived. He and his uncle faced unspeakable privation and danger from rickety over-crowded boats, storms and pirates. Khang and his uncle arrived in a refugee camp in Malaysia together, but soon, his uncle left and Khang was on his own, an 11-year-old unaccompanied minor abandoned in a vast world teeming with human misery.

Khang's luck turned when an Australian family living in Canada sponsored - and ultimately adopted - the young boy. Khang joined the family of John and Debbie New and their seven children in a new life that was foreign to him in every way.

"They were truly amazing people," Khang says of his new family. "John was a professor of European history and Debbie was an electrical engineer who later became an artist. They were very supportive of me and whatever I was interested in." That, as it turned out, was art - specifically sculpture.

"My father gave me a block of wood - one-half cubic meter - of maple, a very dense wood to carve," Khang says. "I loved doing that and I asked if I could turn my bedroom into a studio. My foster parents were just lovely people and very unusual in the way they nurtured me and gave me whatever I needed. They said, 'It's very difficult to make a living in art, Khang,' but they let me do what I needed to do.

His luck continued in school where, as a Vietnam refugee among a school full of Canadian kids, he stood out. A popular art teacher eased his way by taking Khang under his wing, introducing him to the other students and making it plain the young teenager was valued. One day, he gave each of the students in art class a block of clay and told them to design an abstract sculpture. Khang came back with three pieces and asked for more clay. At that point, McCarthy recognized his exceptional creativity.

Soon the art teacher, Barry McCarthy (now an acclaimed Canadian painter), seeing a kindred soul, realized Khang needed some space to work. He convinced the principal to allow Khang to take over an unused locker room and for the duration of Khang's high school years, that became his studio.

"I would stay until school was out at 3:15, go home, pack my dinner and come back to work," Khang says. "Sometimes I would sleep overnight and nobody would know. I got to be friends with the custodian and he was kind enough to look the other way. People thought I was the earliest student to arrive at school, but it was because I had slept there. Now, I look back on that and can't imagine how they allowed it, and can only imagine how bad it would have been if I had gotten hurt. But I didn't, and it was huge gift -- getting to work for as long as I wanted to without interruption.

After high school, Khang attended the Ontario College of Art where he studied sculpture and sculpture installation. "We were trained to do busts, human figures and all that," he says. "But I never really enjoyed that. I enjoy the free-form, the abstract. I like something that is created from nothing - purely from the imagination into an idea that I can bring to life.

"When I came out of school, it was a real challenge to make a living. I had to struggle for many years, working odd jobs. I'd go do a job, come back and say, 'OK, you have two hours. You should get some sleep.' But I wouldn't. I would go down in my basement and do some more work. I was always sleep-deprived then, but it was also so fun."

In 1999, a patron of Khang, Douglas Dales, decided it was time for the young man to return to his birthplace, to be reunited with his birth parents and his culture.

When Dales and Khang arrived in Vietnam to reunite with his family, Dales took the young sculptor to a village in central Vietnam and it was there the path of Khang's life changed forever. It was a village of stone masons and Khang did his first piece in marble there. He loved working in stone and the piece, he says, was "OK. Just not as nice as I would have liked." He asked them about granite and they said they didn't carve granite: the material was just too hard. But Khang realized that granite was exactly what he wanted.

"I realized that marble can't stand up to the harsh weather we have in North America," he says. "Granite stands up to anything. A lot of people want to buy pieces they can place outdoors, but marble will never have the staying power that granite will. So I began to look into granite and just fell in love with it. The variety of colors is mind-blowing. It's an amazing material to work with."

In 2001, Khang moved from Toronto and built a new private studio in Vietnam that is situated about 100 meters from the ocean, in an isolated tranquil area where nearby granite quarries provide most of the stones he carves. As with many granite quarries throughout the world, sculptors are in a race with architects and builders who are snapping up as much granite as they can obtain for use as garden features, kitchen countertops, accent islands and bar tops. Vietnam's quantity of granite is somewhat limited, but one of the huge pluses of being there, Khang says, is that the weather is always warm and he can work outside year- round.

All those curves and arches take significant work over many months to produce. Khang sometimes goes through 20 angle grinders and thousands of circular diamond blades to complete a piece. To create the depth of polish he achieves, he begins with 50 grit diamond pads, then goes up to 300, then 1,000 and so on until he reaches 3,500 or so and begins to buff the surface. "When you do that many steps," he says, "that's how it gets that ultimate surface." He is currently experimenting with various textures and says future works will feature contrasts with smooth and rough surfaces.

His current project is the creation of the sculpture INFINITY, from a massive 200-ton block of white granite, which he believes might represent the largest project of its kind being done without commission. He loves the challenge the immense mass represents. And, as his history indicates, once Khang gets hold of a challenge, he isn't likely to let go until he's created precisely the sculpture he sees in his imagination.

Khang explores his designs in different sizes and colors of granite. Each work is unique.

Khang Pham-New has received many awards for his work and has appeared on television, film and on radio programs

He is a member of the Sculptor's Society of Canada and has been the President of the Vietnamese-Canadian Art Group in Toronto.

My childhood experience in the Vietnam War has, paradoxically, become a driving force in my artistic creations. Escaping from the war-ravaged small village in Vietnam at age eleven, my consequent voyage with other "boat people" started my life journey for love in a more humane world.

I am impassioned with biomorphic abstract forms. As an artist, I am aware of and respect the (art) movements of my time, but to create, I remove myself from the influences of the time and retreat into a private space where I can experiment and explore possibilities of each phase of my inner life.

I continue to search for an organic fusion between my creative ideas and the abstract form. If such a fusion exists, or a moment of visualizing such fusion is possible, I know it only exists in the long journey ahead.

When sculpting, I employ abstract sculpture language to explore human relationships, which to me, are the origin of life. Lines, especially curved lines, fascinate me; they seem to have the capacity for embracing all other lines; forming various shapes. Curved lines are also metaphors, they represent the feminine power in the universe, the nourishing and generating force of all lives. Joining curved lines with other lines, I have created the sacred bond between mother and her children, compassionate love among human beings, intensive love between lovers, cyclical movements in nature.

Many of my sculptures express the self-contained cosmos in its cycle of exhaustion and regeneration. In other pieces I have combined forms in a way that is expressive of relationships between living beings. It is not enough for me that a work of art be beautiful or express emotion: I want my pieces to carry each viewer beyond sensation, into realms of contemplation. 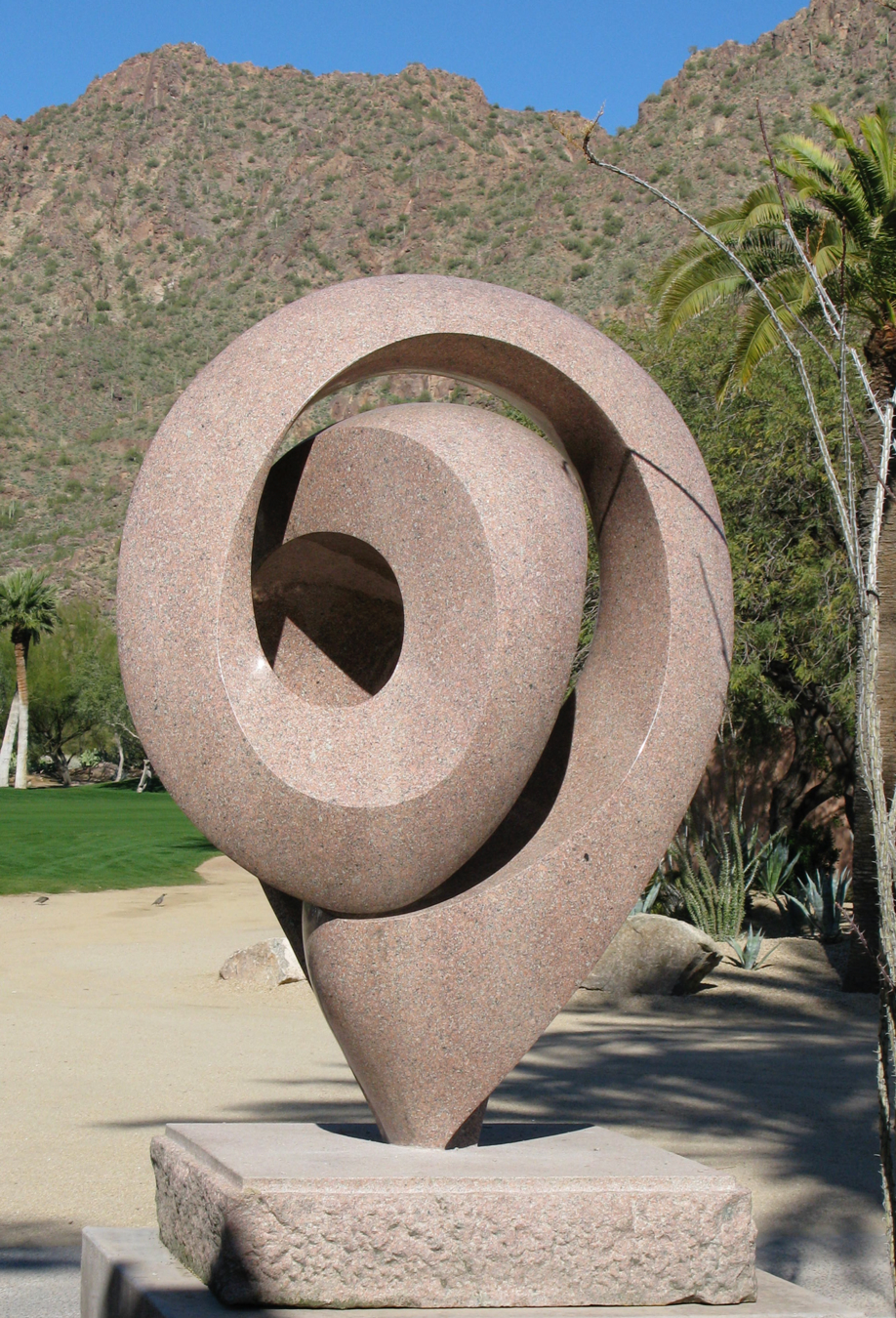